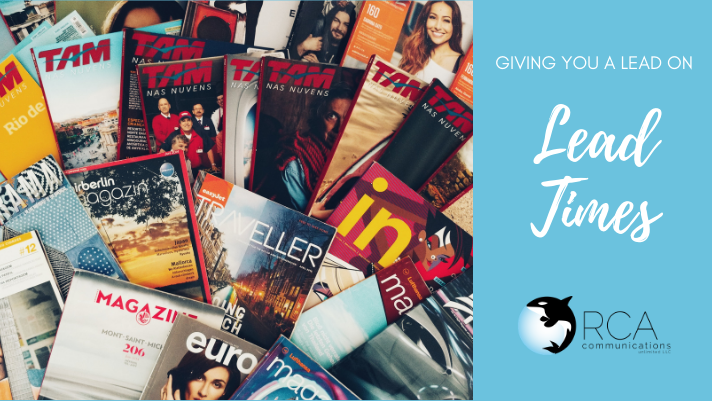 Clients will sometimes start a campaign with us and ask if we can get them into top national magazines quickly. Unfortunately the answer is no. But it’s not because we don’t have the right contacts or we won’t work hard – it’s simply because lead times dictate aspects of PR.

Media outlets are funneled into two lead time categories: short and long lead. Both offer fantastic opportunities to gain brand exposure. They work on different timelines, however, and anyone pursuing media coverage should be closely familiar with their schedules for the best chance of success.

Let’s dive into short-lead outlets first. This group includes TV, radio, newspapers, all digital media (news websites, bloggers, social influencers and online counterparts to print media), and some regional magazines. These types of outlets can publish a story, interview or product review within a matter of weeks to a few months. There are times they can turn-around press coverage in mere days – this is most likely with TV and online media, depending on the timely nature of your story/product. This sector of the media can work faster with ever-changing headlines and can choose to cover a product they’re interested in rather quickly. To clarify, this group is typically guided by predetermined editorial plans and what a publicist pitches still may need to fit into that framework. However, these outlets can be more flexible and it’s certainly possible for placements to pan out sooner versus later. Generally speaking, online media, newspapers and broadcast work anywhere from two weeks to two months out; regional magazines work approximately two to four months in advance.

Long-lead outlets are the opposite. For many brands, national magazines are the cream of the crop! It’s important to understand these outlets can take a lengthy amount of time from pitching to publication. National magazines work strictly off of an editorial calendar laid out a year in advance. Generally speaking, these editors plan and finalize each issue’s content 4-6 months out from print date. Possibly shorter or longer, but that’s a good rule of thumb.  For instance, in April national magazine editors are likely working on August and September issues; come June and July, while beach days and summer BBQs fill their weekends, at the office it’s already the Christmas season.

There’s a lot more time and patience involved in getting into a glossy, “wish list” publication, but it’s definitely worth pursuing because the exposure and brand recognition is huge! Here at Orca, we have countless examples of national magazines featuring our clients a year or more after the editor expressed initial interest and/or requested a sample for closer consideration.

To best capture what you want out of a PR campaign, it’s good to think backwards. If your goal is holiday gift guides at major mags in November and December, it’s wise to start your PR push no later than June. On the contrary, if you’ve got a great product for summer entertaining, short lead media will be all ears from May through July.

Our publicists are constantly on the lookout for both short-lead and long-lead angles for their clients in order to land the most fitting coverage. You’ll find them pitching Memorial Day must-haves and Halloween hooks in the same week.

Keep in mind that although these editorial timelines are pretty consistent, there can be anomalies – like a TV station that comes to us six months after receiving our pitch finally interested in doing the story; or a last-minute opening in a magazine that’s about to close. But your best chance of PR success is respecting and working within the media’s timetables.