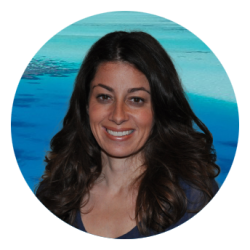 Julie Simon brings 10 plus years of experience in television news. For more than a decade she was on the front lines covering dangerous wildfires on the Nevada/California border, Hurricane Rita on the Texas coast, and rebuilding efforts for a new generation in Communist Vietnam. On a lighter side, she’s covered tryouts for American Idol and MTV’s Real World. She’s interviewed such notables as former President Clinton, Lance Armstrong, and Jay Leno.

Julie started her career  as a field producer at the KVBC the NBC affiliate in her hometown of Las Vegas (people often ask if growing up in Las Vegas she lived in a house or a hotel- the answer is a house)! She then moved from behind the camera to in front of it as a reporter at KRNV, the NBC affiliate in Reno. She moved to KEYE, the CBS affiliate in her adopted hometown of Austin, Texas. While there, she won the Associated Press Texas Reporter of the Year award. She has also worked for CNN at The White House and for the FOX program, America’s Most Wanted.

Her love of Public Relations stems from a knack of knowing what makes a company’s product, service or founder newsworthy. She has impeccable contacts in the media sphere.

Julie and her husband live in Austin,TX with their 3 sons Elias, Jonas and Julian.